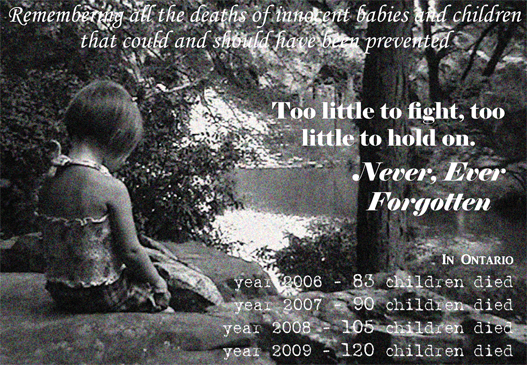 Remembering all our little angels…Taken to Heaven

This memorial page is an important, but very sensitive subject. I hope it has the ability to draw out strength, faith and hope from within, but it carries with an underlying fear of the unimaginable happening again. I have done my best to do this page with much sensitivity. I hope, and pray this can be an introduction to a lifelong commitment to “Never Forget”, and this is a way to take action and to make sure by the atrocities, or similar crimes that took place do not take place in the future.

Please note: this page is a list of children, youths, and disabled who have died under the ministry direction, after social service agencies placed them in private government run programs, group homes, foster caregivers, psychiatric facilities, schoolsâ€¦ AND THE LIST KEEPS GROWING. This can only happen if the Executive Director of Child Services, Politicians, and Police allow this to happen. I wish to offer my deepest sympathy to each and every one of them. I hope to ease their pain a little by letting them know some of us really care “Care Beyond Belief” If a few degrading comments and the loss of a career is overwhelming, I cannot imagine the loss of a loved one or the brutal abuse of an individual.

If you are visiting this site and have an angel you would like to add to this page, please email me. I love to honor yours!

Sara had endured 24 broken bones — including 16 fractured ribs, broken legs and a broken arm — at the hands of her crack-addled parents, Michael Podniewicz and Lisa Olsen, who were, two years later, convicted of second-degree murder in the baby’s death.

The trial jurors learned that though Podniewicz had been convicted earlier of aggravated assault on the couple’s first child, Mikey Jr. — an attack that left the infant deaf, blind, partially paralyzed and with the permanent mental age of 10 weeks — he was nonetheless allowed, after his release from prison, to move back in with his wife, then pregnant with Sara, and their other three children.

Baby Sampson, you suffered so much but now you are at peace with God. You were the most precious little girl and you will never leave our hearts.

Jordan Desmond Heikamp starved to death in 1997, skin wasted to the bone, under the watch of the Toronto Catholic Children’s Aid Society. He died of chronic starvation five weeks after he was born in 1997.

Jeffrey Baldwin died a miserable, lonely death. No caseworker, no supervisor, no executive was ever called to the stand.

Evander, age 22 months, passed away on June 8, 2010 in a foster home. There was extensive burn, and evidence of third degree burns over the entire body from face and head to toe on the infant’s body with the exception of the diapered torso.

Caroline Touchie, an aboriginal child who died in a foster home on Sept. 11, 2007, just five days after she was taken from her mother’s care.